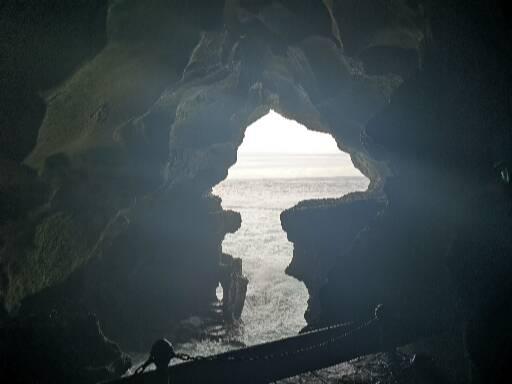 You will find this famous natural grotto on the coast in the region of Tangiers-Tetouan-Al Hoceima. The caves are just 14 kilometres west of the centre of Tangier. It has been a well-known tourist spot since the 1920s. It is easy to get there by bus or taxi. A taxi should cost around 50 Dirham each way, but its not easy to find one who will take you.

Red double decker tour buses leave Tanger med every two hours. It seems an indulgence at 130 dirhams a ticket, but well worth it! The ticket lasts for 48 hours and you can jump on or off at any point in the journey. It is possible at some hotels to reserve a ticket for 20 Dirham, then pay the rest on the bus. Take the free headphones as you get on, so you can listen to a recorded guide in any language as you go along. The bus takes you first through the City Nouveau, identifying many sacred places.

Soon after leaving the city, a winding road leads through palatial dwellings past the magnificent Pedicaris estate. The Greek-American tycoon Ion “Jon” Perdicaris once owned a summer home in the hills above Tangier, a vine covered villa he called “Place of Nightingales”, complete with a tame demoiselle crane and a pair of pet monkeys, who ate orange blossoms. You can read about the famous Pedicaris affair here. A fascinating story that had a Greek/American playboy John Hanford Pedicaris and his British step son kidnapped by Mulai Ahmed Er Raisuli and his bandits.

We pass a huge park, a diverse canopy, lush and green. Before the International incident with Raisuli, Pedicaris had planted thousands of trees to help his wife’s breathing. Even though it is raining I sit at the back of the bus and open the window wide, to breathe in the clear Moroccan air. Locally, Pedicaris Park is known as the lungs of Tangier. It is full of non-native eucalyptus and tangerine trees, that have expanded out from the region. They grow alongside hundreds of palms, cedar, olive and fig trees.

Continuing the journey along stunning coastline, the bus approaches the lighthouse at Cape Spartel, where the Atlantic Ocean meets the Mediteranian Sea. As we pass the promontory at the entrance to the Straight of Gibralter, the view is spectacular. The Caves of Hercules are just a kilometre away. The recording speaks of Hercules, the twelve labour’s and Atlas. My mind comes alive with European and African Mythos and I start to feel the landscape ripple with stories.

Hera, determined to eradicate Hercules, suggested to Eurystheus that he order Hercules to fulfill twelve impossible labours. Hera believed that Hercules would die attempting to complete them, which would finally eradicate him from the world.

Mythology tells us that Hercules took reprieve at the Caves of Hercules before taking on the 11th Labour. If you look at the ten previous tasks, you can see why he needed a rest. The 11th task seemed impossible, bringing back the golden apples kept at the world’s end by the Hesperides. He would need the help of Atlas, father of the Hesperides. But Atlas was busy holding up the heavens.

Hercules offered to take the weight of the heavens if Atlas would retrieve the golden apples. What a great opportunity for Atlas to take a break!

When Atlas returns with the apples, he tells Hercules that he will take them to King
Eurystheus himself and Hercules would have to continue to carry the weight of the heavens on his shoulders. Hercules told Atlas he would gladly, but he needed to be more comfortable. He wanted to cushion his shoulders with his cloak to bear the weight. If Atlas would just hold it for a moment, then he would take it back. Then as soon as Atlas took the load, Hercules grabbed the apples and scarpered.

The Straight of Gibralter

Once his exploits were accomplished, Hercules dug the Strait of Gibraltar by moving the mountains (the Djebel Tarik of Gibraltar in Europe and the Djebel Moussa in Africa, near Ceuta). He created what we call the pillars of Hercules.

He is, of course, credited with developing The Caves of Hercules near Tangier. For some, it is here that the Cyclops Polyphemus, son of Poseidon the god of the sea, lived and whom Ulysses astonished during his trip. The connection to Hercules however has endured over time.

In truth, the caves were excavated in the Neolithic era, the rock exploited for various works and tools, you can see the circles carved on the walls to take the stone for making millstones.

The Caves of Hercules

The bus drops us close to the entrance of the caves of Herrcules and we have a choice. Leave on this bus in 15 minutes or stay for 2 hours and return on the next bus. I’d recommend taking the next bus, 15 minutes is not enough time.

Inside the caves, a main corridor leads to several rooms. Openings with characteristic shapes cut out in the walls allowing you to see the ocean. The water splashes majestically against the opening. The largest door to the sea is shaped like the map of Africa. You can even see Madagascar there.

Sitting in the caves, you begin to get a sense of the titan spirits of nature, massive otherworldly beings belonging to this continent. I have an overwhelming sense of gratitude as the vast mythic landscape opens up in this underworld realm. I give thanks and leave an offering.

We decline the tourist dressing up moment with the photographer and continue to another grotto. This one costs 10 Dirham or 1 Euro to get in. It is a fun little cave with plenty of photo opportunities. Statues and artwork celebrate the 12 Labour’s of Hercules as water flows through this small yet equally spectacular cave. It reminds me of the White Spring somehow, before it was a sanctuary, when it was dressed for tourists and selling trinkets.

The Square on the Tip of Africa.

Outside the cave is a small Grecian styled square, which must be stunning at sunset when the fire trays are lit. We imagine the gatherings that must have taken place here over time. even Def Leppard famously played a concert here. There are small cafes and shops offering drinks and snacks. Toilets are available for small donation.

From the square, you can climb down the rocks to the sea. It’s a bit mucky, with litter and plastic bottles. One of the little caves looks and smells like nature’s own toilet. Avoid this and make for the ocean, but do take care. The sea jumps up to meet you and it wouldn’t take much to get swept off these rocks at high tide.

Eventually we ride the bus back to the port and return to the hotel in Tangier to dream of mythos, Gods, men and triumphs. It is fascinating to explore the mythos of this area, it is rich with stories, some familiar like the Greek tales and some, more obscure, from the ancient Berber culture rooted well before Islam. I look forward to discovering more as our journey continues.