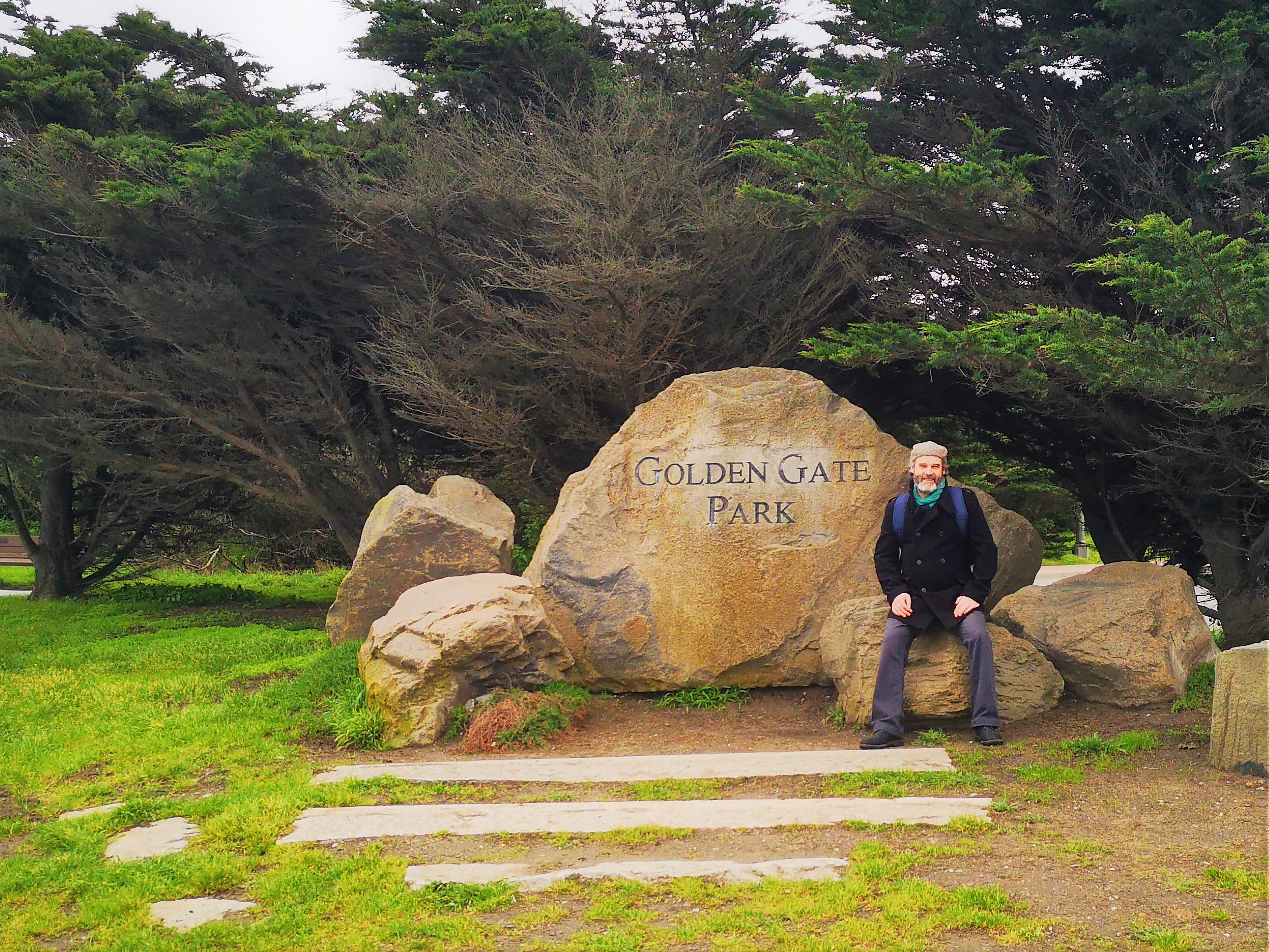 Under a grey overcast San Francisco sky, we head off toward Golden Gate Park with less of a plan and more of a list of places we want to visit. The Botanical Gardens are open for free on the second Tuesday of every month, nicely synchronising with our visit, so that’s on the agenda for this afternoon. First, we want to take advantage of the dry weather to explore the Golden Gate coastal walk.

Buffalo in a Park!

Our place is on 21st Avenue, South side of Golden Gate Park, about 2 miles to Ocean Beach. To save time, we could take the N car on Judah Street right down to the Great Highway, but we decide it’s nicer to walk through the park.

It’s chilly and we need our winter coats.

Nevertheless, there are lots of people out and about undaunted by the weather. We ignore the signs to the botanical gardens and wander through the park diagonally toward the North-West corner.

We pass people practicing Tai Chi, groups of nursery children listening to stories and a bison paddock. An intriguing ‘Chain of Lakes,’ calls our attention. We could easily spend the whole day just chilling in the park, getting distracted, but we stick to the plan and head on, missing the bison and the lakes. The park is full of all kinds of odd gardens and things to see. On the North West side is a Dutch Windmill. It looks out of place, but fits in somehow with the diverse distractions.

Leaving the park, we cross the Great Highway to set foot on Ocean Beach. Oh my goodness, this ocean is phenomenal! I have a fascinating tale to tell about this magnificent being and it is not finished yet. That story is for another day. For now, we continue the adventure. Onward to the Golden Gate Coastal Walk.

Several rooks gather around and we narrowly avoid an attempted murder. Seagulls come in to see what the fuss is about and start puffing out their chests, scattering the small gathering of crows. I don’t know who’s turf this really is. We decide to leg it when the seagulls arrive, because ‘would you trust a seagull?’ When they turn up, you know bad stuff is going down.

Leaving the birds to their gang war, I hum the opening score of ‘The Jets Song’ from West Side Story while we make our way up to the Cliff House to find the Camera Obscura.

This small white building is made to look like a long forgotten tourist’s camera, and it is most certainly closed. A notice says it should be open today, but there is no sign of anyone. I am gutted. This place was on our list and I was looking forward to getting a look inside. It’s not going to help us get a good score on ‘San Francisco Bardic Bingo’ if the places we visit are closed.

More about that later.

A curious wooden building overlooking the Pacific Ocean draws us further up the cliff and the promise of breakfast lures us in.

Louis’ is a cosy, old fashioned diner offering a classic American breakfast and lunch menu. The waitress brings our pancakes and eggs. “Just letting you know,” she says, “there have been a lot of dolphins in the bay today.”

Dolphins in the Wild!

We look out to the ocean and immediately dolphins appear diving out of the water. We have never seen dolphins in the wild. The whole place is energised, an enthusiastic family on the next table discuss the differences between dolphins and porpoises. They come to the conclusion that such a large pod must be dolphins.

As the excitement settles, we ask our magical dolphin summoning waitress about Sutro Baths. The ruins sit beneath us on the beach. She brings us a book with photos from the late 1800’s. Opulent swimming baths, high ceilings and stained-glass windows, a dance hall, mayday celebrations with a maypole and dancing children. All gone now.

Sutro Baths was opened in 1896 as the largest indoor swimming pool in the world. The whole complex was completely lost to a fire in 1966. In this film you can see Louis’ restaurant overlooking the scene, survives the fire.

The site itself is a bit spooky. It’s fun to imagine Sutra Baths in its heyday, full of people in their bathing suits. At night people have heard and seen their ghostly forms, but today is not good for bathing and the ruins are empty.

At the bottom of the path to the ruins a long tunnel leads through the cliff onto a little beach, a scene of past shipwrecks. In the shadows of the tunnel, it’s easy to believe that Sutro Baths were once thought to be cursed.

There are mysterious stories of the ruins, such as a clawed creature using the cave as it’s lair and a dangerous underground satanic cult practicing the dark arts.

I’d be thrilled to find any evidence of claw marks, a pentagram or a pile of bones. Sadly, there’s not even the glimmer of a ghost. Nothing but an eerie feeling, spectacular views and the power of the ocean.

Retracing our steps up to the path we get back on track and continue along the Golden Gate Coastal Walk.

Onward to The Labyrinth at Land’s End.