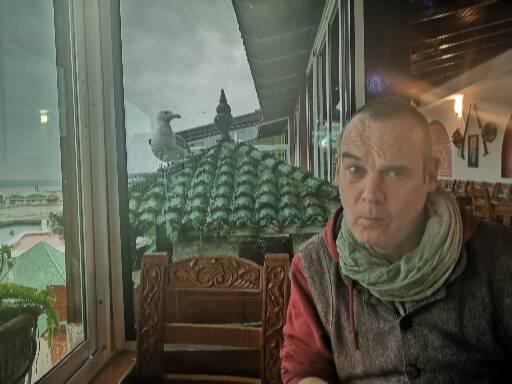 After a great breakfast at Hotel Mamora, a nice place with decor evocative of Spain in the late 70’s, we set off to explore Tangier. Rather than endure the hustle of the Petit Socco we decide to go to the beach. At the place where the taxi dropped us last night a random guy comes to talk to us. He asks if we are English or American, we tell him English. He smiles and says “Lovely jubbly, fish and chips, Marks and Spensers” in a mock cockney accent. Then he pulls a faded leaflet from his pocket, tells us the Rolling Stones and the Clash lived in Tangiers. Next he sings ‘Rock the Casbah,’ but just that line.

Rashid takes a faded leaflet from his pocket and reads a few names from it. He proudly announces that Winston Churchill stayed at Hotel Continental. He tries to remember other English names and asks to show us around. We tell him we want to find our own way. He says “The people in Tangier always bother you, they are like mosquitoes. “I will keep the mosquitoes away for 5 euros.” I told him he was very kind, but we just want to walk together and relax.

Then he offers to get us some drugs, telling us it is the best quality in Morocco. Immediately I tell him no thanks. However much fun it might be, we did not come for sex, drugs and rock the casbah. We have to keep our wits about us to make the next connection on the bus to Chefchaouen.

Naked Lunch by notorious beat poet William Burroughs was written here. Moreover, Tangiers is renowned for other such literary greats as Paul Bowles, Cecil Beaton, Joe Orton, Jack Karouac, Alan Ginsburg and Tennessee Williams. They all arrived searching for freedom, cheap thrills and a way of life impossible to find in Europe or America. The Rolling Stones famously paid a visit to Morocco in the late 60s while waiting for a verdict on drug charges against them.

I don’t know if it is true that Joe Strummer wrote the song Rock the Casbah while staying here in Tangier. Nevertheless, true or not, the song plays in my head for the whole day.

The most celebrated literary figure of Tangier of course is Ibn Battuta, a scholar and explorer who travelled more than any other explorer in pre-modern history. Born in 1304 in Morocco’s northern port of Tangier, Ibn Battuta was wise beyond his years, and full of a passionate wanderlust.

Totalling around 117,000 km (73,000 mi) over a period of thirty years, Ibn Battuta visited most of southern Eurasia, including Central Asia, Southeast Asia, South Asia, China, and the Iberian Peninsular. Near the end of his life, he dictated an account of his journeys, titled A Gift to Those Who Contemplate the Wonders of Cities and the Marvels of Travelling. I guess he could be considered the first travel blogger.

Along the route to the Kasbah, men approach us every now and then, generally buzzing around wanting to walk with us. This is what Rashid meant by mosquitos.

We try out a supposed repellent, “La shokran, La bas.” Arabic for “No thank you, I’m good.” A polite way to say I’m not interested.

Up by the Kasbah there are a few nice things to see. First of all, there’s the gorgeous view across the Gibralter Straight out to Spain. Look out for the Kasbah museum, contemporary art gallery, Dar Zero, the first house in Tangier with a magnificent old Fig tree on the terrace garden. Or you can take a walk around the walls of the Kasbah itself.

Grief After The Laughing Gate

As we leave the area, a young man comes and tells us a bit about this part of the Kasbah and the nearby Bab which means gate or door. It is called ‘Bab Haha,’. It is called such because it is the first door you pass out of the prison next to the Kasbah. Subsequently, when people are freed, they go through this gate and laugh.

We pass through the gate and head down to Petit Socco. Here we witness the most overwhelming and powerful outpouring of brotherhood. First we hear loud singing, men’s voices. We stop as a procession of men and boys, come powering through the narrow lanes. Several of the men are carrying a body wrapped in cloth on a stretcher.They stop right by us to rebalance and adjust the body. As they do so, they keep singing.

We stand in stillness, tears in our eyes and hand on heart. Such love expressed by beautiful brothers, fathers and sons all singing together in grief is powerful. After they pass by, one of the men in the procession comes and speaks with us.

“You come in with nothing and go out with nothing. ” he says and points after them. “See, he is nothing! Enshallah. He lived a good life in the medina. One side life and one side death, you can’t pay your way into paradise, only live a good life, like he did.”