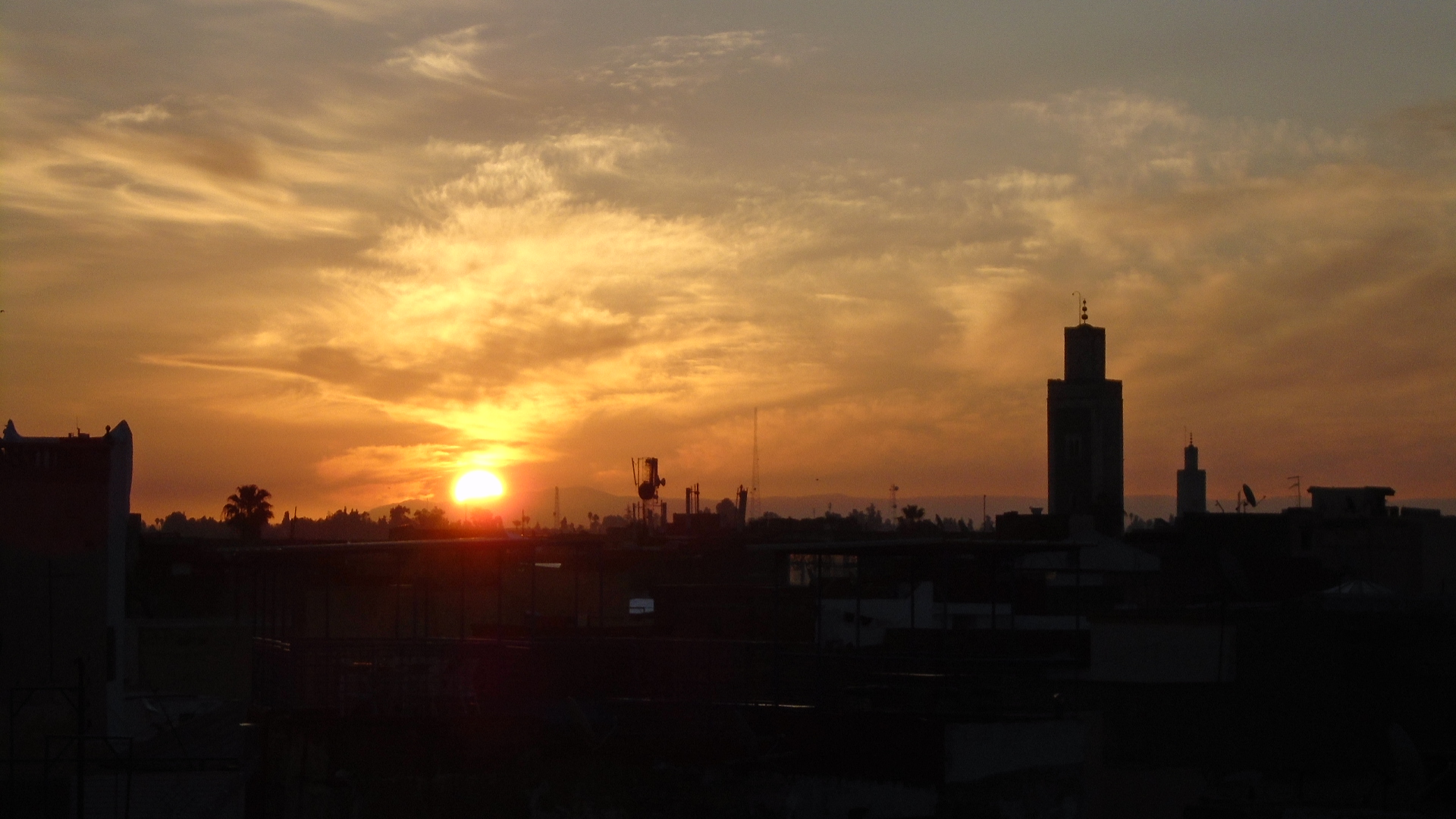 It was our first morning in Meknes and I hadn’t even considered the Djinn. We had a crazy journey on the bus from Fes to Moulay Idris and spent a couple of nights in Dar Zerhoune, a riad that supports the donkeys. From there we took a dodgy taxi to Volubilis before taking another bus to Meknes.

We learnt a lot about the sacred landscape, the spirits that dwell at each of the gateways and fully experienced Divine spirit in the holy places. Someone even told us a story about Fatima the fairy, but the Djinn didn’t come fully into the picture until later.

Meknes felt like home. This particular sunlight in this particular place was familiar on my skin, in my blood. The colours of the mosaics and the soft peach medina walls were nostalgic to my eyes. The culture is wildly different, yes, but I was comfortable with it.

We got off the bus and made our way directly to Riad Atika. Walking across the square and into the narrow medina lanes, our wheeled cases rumbled on the cobbles. Heads popped out of the shops as traders heard the sound of new tourists arriving.

Jaques welcomed us like we were old friends, took our details and served us mint tea on the terrace. It was late, the sun was setting, the evening becoming cold. After a day travelling on the bus we needed an early night.

We were woken early with the sky still dark, startled by the morning prayers blasting from a speaker on the minaret next to our room. I love the morning prayers, it is like someone singing, “God has made this glorious day for you to enjoy. Get up and enjoy it!”

When we got up, we went to the top terrace and watched the golden sun rise over the royal city. Blissed out, we made our way down to the dining room. Jaques had prepared a wonderful Morrocan breakfast of msemen, sheeps cheese, olives and honey, served with mint tea and strong coffee. A perfect start to the day.

Another couple joined us in the dining room. We shared stories and joked about travelling. The men had a bet on whose wife would get them into the most dangerous situation today. I guessed it would most likely be me.

We were well prepared with a bottle of water, a light scarf and some snacks. Stepping out into the medina, rushing past the stalls selling cheap copies of western clothing, and into the craft areas. We spent the hot February morning exploring the old medina and haggling in the marketplace.

In the afternoon, we left the Old City to find a huge family of feral cats and soak up the history in the Old Royal Stables.

My great-grandmother’s uncle, General Poeymirau, was a French Officer stationed in Meknes. His horse would have been stabled here. When I was a young girl I remember seeing a picture of Joseph Poeymirau riding a horse past the gate at Bab Mansour.

When we got back to Bab Mansour, the sun was setting and Meknes Square was bustling with folk. There were big circles of people, gathered around different street performances. One was a literal boxing ring. A man with two sets of boxing gloves asked for volunteers from the crowd who wanted to fight. He was taking take bets on who would win. Another circle involved bottles of pop and a fishing line with a hoop on it. Others involved animals; peacocks, an ostrich, monkeys, a snake charmer, needless to say, I avoided those.

The circle I was interested in was the largest of them all. There were three musicians and a storyteller speaking in Arabic. We were the only western tourists in the crowd.

The music stopped and the storyteller asked for a volunteer. He wanted a female, he indicated this by pulling his shirt out to make pointy breasts. The Muslim women shied away from him. Several of the men standing near me started shouting and pointing at me, and the storyteller turned, checked with Max and then beckoned for me to join him in the arena.

What is a Bard to do?

When a circle of eyes invite me in, of course, I am honour bound to step forth. So, surrounded by over a hundred strangers, the storyteller involved me in his tale. He got me to dance with him. I didn’t understand a word he was saying, he didn’t understand me. There was no need, I just enjoyed the melody and rhythm of his speech, played my part and stood where he put me.

Making eye contact with the women around me, I checked in with them. I didn’t want to be disrespectful of a culture I didn’t yet know. Their encouraging glances and shy smiles made me feel more at ease. I am glad to say I managed to exercise the right decorum and even made the crowd laugh.

From what I could make out, the story was about a woman, a pair of shoes, and a dance. The main focus of the plot, however, appeared to be about a magic hat that didn’t have enough money in it, the storyteller referred to it and passed it round several times. People eagerly threw in coins and eventually he began to count them.

Where is my cut?

I had been told to sit on a small stool near the musicians, I watched carefully as the storyteller counted his takings. An old man with creased leather skin pointed at me and made a joke in Arabic. Somehow I got it. The storyteller stopped counting and looked right at me, I made a cutting gesture on my hand, to suggest I wanted a cut. Hilarious and brave, but I was shaking inside. What is it about excitement and anxiety being on the exact same frequency?

Afterwards, the storyteller respectfully returned me to my husband bowed and asked him for some bakshish. Max made a joke about not having to buy his wife back. It was a beautiful and good natured exchange, despite the language barrier. Nevertheless, when we walked away from the encounter, I was gripping Max’s arm so hard he had to ask me to let go. We returned to Riad Atika and announced to our new friends that Max might have won the bet.

Now, many wonderful things happened after this, however to stay with my story and the Djinn I need to fast forward a week or so.

We arrived home, kissed by the sun, wearing our jelabahs, carrying gifts from the bazaars, welcomed home by the family. After a cup of tea and excited hugs, they all went out leaving us alone in the kitchen. The house was empty.

We started looking through the photographs and came across the ones Max had taken of me and the storyteller in Meknes. We marvelled at how tense the energy was and what a magical experience it had been, a true levelling up on my Bardic skills.

The pictures were taken in the face of the setting sun and were not too clear, but I noticed a prominent rainbow at my feet. Check them out, there is even a red portal over the storytellers empty shoes. Yes, it is most likely camera glare, but nevertheless incredibly magical for it to have happened in that particular way. It still gives me a shiver to see those pictures.

I said to Max, “I wonder if that was a djinn, do you think it could have followed us home?”

The moment I said it, a gust of wind whooshed past us, and went through the whole house banging every door, even upstairs! We sat stunned, hearts racing.

Could it be true?

In the Koran, Djinn are said to be born of fire without smoke. They can be troublesome to say the least. The more I found out about Djinn, the more convinced I was that one had come home with us.

For the next few months I noticed more supernatural activity than usual in the house. I am used to a certain amount of activity, sensitive to otherworldy spirits because of the work I do and how I engage with my inner landscape. This was different. Exotic, fast and at times, quite terrifying.

Is it malefic or benevolent?

When I tuned in, I got a sense of it could be either, or both. I read books about Morocco and the Djinn, even started to read Arabian Nights, and parts of the Koran. I learned all I could. Once, I ended up down a rabbit hole with spells and dispels, exorcisms and prayers.

I took care not to leave uncovered pots of food out, to keep the toilet seat down, hung my hand of Fatima and bought myself a little genie charm. I am accustomed to leaving offerings for the spirits, so I added offerings of oud, honey and clay from the Atlas mountains.

Disturbances in the night started to keep me awake. In the dark, I would see shapes in the shadows, and occasional unexplained banging. So I decided to shut the windows and doors with a simple “Bismillah.”

I asked the Djinn to make itself known, or leave me alone. After a few nights, I had a dream in which a black pointed glistening face with too many sharp teeth came so close I could feel the heat of it’s breath, it said, “Bismillah Hahaha.”

Sinister as it was, shrinking away from something like this is not my style, even in dreaming. I laughed just as hard, right back at it. In my head I said, okay then, let me introduce you to my Gods. And I did.

There were no more disturbances in the night. Still, the Djinn was around, just not so troublesome.

We needed to go back to Meknes, I wanted to explore a connection with someone who knew of my ancestor. I also wondered whether it would be wise to return with the Djinn. So we took another small trip in May.

Only three nights were spent in Meknes on that second trip, but we did see the same storyteller in the same place. He was really struggling to get a crowd. No one was listening to him and he didn’t carry the same charisma. I made a wish that if it be in Divine right order, that the Djinn return.

I still have a connection with this being and I know it’s name, but it is not so present as it was three years ago. Perhaps I need to visit Meknes again.