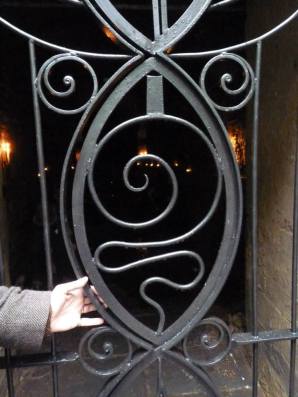 The Salon of the Western Mystery Tradition.

Tonight we were guests of RJ Stewart and Anastacia Nutt at the Salon of the Western Mystery Tradition, an online monthly gathering of minds. The topic under discussion was Magical Smiths and Magical Artifacts. I have been requested to post the poem I read online, so I am taking the chance to post some excerpts from the presentation. Some fascinating questions arose from our work and we were given more fuel for the intellectual fire and other pathways to explore on this particular theme. Max’s journey was wonderful, but we have not included it here. I know this is a travel blog, but you can expect a bit of travel to other realms, because we do that too! If you are interested in journeying to other realms, please contact Max for more information.

Not all enchantments come from sorcerers, witches, wizards and faery folk. Some come from a much more tangible and down to earth source. The enchantment of the blacksmith is evocative of profound and lasting change. His living mythology weaves through all cultures, all around the world. With the clang of iron on iron, the heat of burning coal, the forced breath of the bellows, the hissing of steam, the sweat and muscle straining of the blacksmith, magical transformation is brought alive in the very fabric of the forge.

Living mythology is founded on the principle that we are all made up of stories. Tales and encounters weave through our lifetime to collide with legends and mysteries of the past, creating meaning and relevance today through our interactions. We can use these stories of the past to empower and enrich our experience of life. In this context, the blacksmith archetype is a profound source of sacro-magical power.

So, I want to start with a relatively recent legend, where our personal mythology collided with that of a master blacksmith.

For many years we were Custodians at the White Spring under Glastonbury Tor. Here at the water temple we hold a Shrine enclosed in a hazel bower in which burns a sacred flame in honour of the Bright goddess. Brigid. Saint and goddess, she is the patron of healers, poets and blacksmiths. Her triple flame alludes to the warmth of the hearth, the spark of inspiration and the hot fires of the forge. Whatever our craft, we shape our world in the name of Brighde.

In the Name of Brighde

Today we honour Dagda’s daughter,
She thrice blessed by fire and water.
As we crave the light and stir the seeds;
We shape our world in the name of Brighde.

The poet’s art, a fire in the head,
Words to inspire, craft prayers unsaid.
Hark to the sound of the bard, and heed;
We shape our world in the name of Brighde.

The healers touch, a fire in the hearth.
The midwife’s blush at every new birth.
Til death’s cold touch, and the spirit freed;
We shape our world in the name of Brighde.

The blacksmith’s craft, the fire of the forge.
The flame of creation to temper the sword,
Empowers the warrior in word and deed;
We shape our world in the name of Brighde.

Yes, today we honour Dagda’s daughter,
She thrice blessed by fire and water.
Her triple flame brings all that we need,
To shape our world in the name of Brighde.

So poets, healers, blacksmiths all,
Feel the impulse, heed the call,
Strong as oak, supple as reed,
Shape your world in the name of Brighde.

The Magical Blacksmith of the White Spring.

Our story begins on a dark and appropriately stormy night in February. The storm was fierce, and noisy, blowing down trees and littering the street with debris. In the morning we got a call from Chalice Well to tell us that all was not well at the Spring. The doors have been torn apart!  They told us.

I thought they were exaggerating until we arrived and saw the damage. The doors were smashed into pieces and the shattered wood strewn around the floor in the courtyard and in the road. Two sets of heavy oak doors utterly destroyed!

I was comforted to find The Brigid flame still burned softly in her shrine.

Whilst we were cleaning up the debris and arranging for the temple to be boarded up and made safe, Max turned to me and said, do you think it is time to get some gates?

A voice came from the water collection point, ‘Gates you say?’

‘Um, yes we think it might be the only solution.’

‘Well how fortunate I am here. I happen to be a blacksmith.’

A broad well-built man with a magnificent beard, wearing a leather apron was collecting water. He introduced himself as Phil Rayner of Millstream Forge. It felt like Brigid had called in her blacksmith and within a week we had worked out the design and Phil met us at the Spring to measure up and seal the deal. Whilst we were talking a resident from the cottage, Susanah, came down and said, ‘I can see you are busy, I just wanted to give you a gift, I will leave it here.’ And she placed a tiny box on the wall. We continued to discuss the plans with phil, pinning down the final details, then just before reaching a final agreement I decided to open the gift.

It was several small ingots of silver! I took out three of them and offered them to the blacksmith as a deposit for the work. He was amazed, now he knew that this was the perfect project. It fitted in neatly with his living mythology too. Max got to work alongside Phil and within a month, the gates were forged.

The gates stand strong today, an elegant boundary at the place between the mundane and the sacred. A testament to the magic of the blacksmith.

This modern-day legend is proof that the magic of the blacksmith still thrives in our community. and the rich mythology available to us brings us home to the power of the Smith. Myths that conflate and weave together through time, and the mixing of culture and travel over many years. You will find similarities in tales of the blacksmith of you look for them. Like Odin taking Wayland Smith’s sword and placing it in a tree, with a promise that the prince who could pull it out would own it and be victorious in all battles. Remind you of anything? Yes, the tales of Excalibur, the sword in the stone, must be rooted in the same story-stem.

To take the raw material of the earth and change it through the application of fire, air and water, to instil magic into bright shining tools, weapons and jewelry, this is the magic of alchemical transformation. It’s like a super power! Working with the raw elements like that. It is easy to see how the blacksmiths of old won such honour and recognition throughout time, and why they are linked to magical forces.

Here is the place between worlds, a sacred space where all the elements are pushed by a skilled smith to a powerful and active state. The fire emboldened and sparking with the heat of the coals, air pushed through the bellows, water turned to steam as the material is tempered, the magical transformation of minerals from the earth. Here, on the edge of crisis, in the liminal space, in between, where the elements lend their full essence to the task at hand. Here is true alchemy.

What better place to go when change is necessary, when crisis has us on our knees and begs for us to be re-forged, re-made? Who better to visit to make a master than the Master Maker Himself?

Max then began the journey to meet Lugh, the Master  Craftsma,n so that each of us could ask him for a re-making. This journey will be available soon, but for now, we will leave it there.