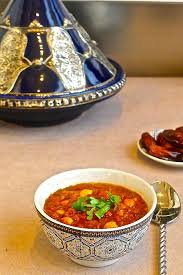 Harira Soup, a delicious and nourishing broth made with tomatoes, chickpeas, lentils, lemon and fragrant spices, laced with little threads of vermicelli, is Morocco’s national dish. Traditionally served in family homes to break the fast of Ramadan, it’s no wonder that it is so celebrated.

Our first taste of harira soup wasn’t surrounded by such prayer and ceremony; served at a terraced restaurant right on the edge of the Fes Medina above a busy taxi rank. It was fascinating to watch the world go by and see the taxi man at work, but this soup tastes so much better without the traffic fumes.

Honestly, I could live off of this stuff, you can get a huge bowl served with fresh bread in a restaurant for 10-20 Moroccan Dirham, which is less than 2 euros!

Chickpea is apparently a very funny word. When I asked a street vendor what he had in his pot and told him they were chickpeas, he found it hilarious. The man had a giant pot of steaming ‘himmas’. He tried to say chickpeas several times and was laughing so much he couldn’t speak. It is so uplifting to be laughing hard with someone when you do not speak their language. The bellay ache and the sparkle in the eye that transcends any need for words. We left him there laughing and went to find someone who was selling soup.

Making harira soup at home is simple and it makes a cheap and satisfying lunch. It’s often made with lamb broth so when you are buying it in Morocco, do check first if you are veggie.

This is my recipe for a quick and tasty vegan and gluten free meal.

Harira soup is often cooked using lamb broth, but you can get a wonderful depth of flavour without using meat. In this vegan recipe we have substituted vegetable bouillon. Usually you would just throw everything together in the pan and cook it for ages. For this vegan recipe fry the vegetables on a low heat for a deeper and sweeter flavour. It is a delicious soup and simple to make. I have used tinned chickpeas to make the whole process quicker but you can of course soak and boil dried chickpeas instead.

The best harira soup we tasted was at Cafe Cinema near Bab Boujiloud, it was light and zesty, I add a lot of lemon to my recipe to get the same refreshing flavour, you might like to use less. It is worth noting that a lot of recipes use Ras El Hannout to spice the soup. This makes a lovely soup, but it doesn’t quite give the authentic flavour we found in Morocco.

I hope you enjoy trying out this recipe, let me know in the comments how you get on.

Please leve a comment if you have made harira soup or have your own traditional variation.