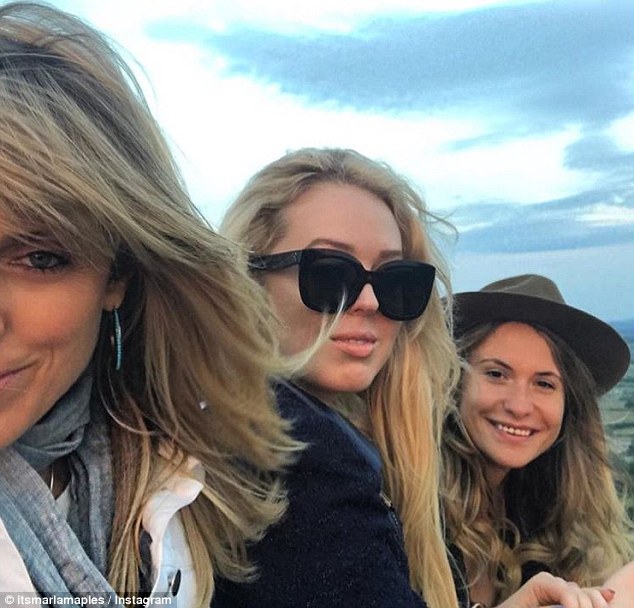 The daughter of the President of the United States, Tiffiany Trump visited Glastonbury this week with her mother Marla Maples and a friend Cat. Marla posted on instagram ‘Secrets unfold high above!’ along with a selfie of the three American women together on top of Glastonbury Tor.

Of course the media took the story and came out with the classic misconception that Glastonbury is the home of world famous Glastonbury Festival. No sign of the festival here Daily Mail … it’s 9 miles down the road in Pilton. Saying that, I did once hear Shirley Bassey playing on the main stage from the top of the Tor. However, the women didn’t come here for the festival.

It looks like they had a more cosmic experience as Marla took to instagram to share her feelings.’Felt as if worlds were coming together as Tiffany, Cat and I (plus some very talkative Sheep) arrived at the top of Glastonbury Tor just as the sun began to set… loved walking this ground and following the signs that led us each on our own path to the Tower and then brought us together again.#findyourpath

There is something profound about this visit. I imagine our little bit of sacredness here somehow reaching into the Trump household, just a little seed of magic sown in the heart of the USA presidency. That the heart of Avalon could somehow begin a transformation so deep and profound to affect the leadership of America. Yes, you may say I’m a dreamer. but I am not the only one.

Britain has a strange relationship with America. They are like an old couple who got divorced back in 1776. The ex-wife, Let’s call her Liberty, has moved on. She celebrates her independence and has got richer and more glamorous. Meanwhile, the ex-husband is bitter. He looks his age and possibly needs pills to keep his stiff upper lip! They are still friends though, they keep in touch and secretly, they still love each other.

Yet, on Friday 13th June 2018 over 250,000 people took to the streets on a weekday to demonstrate against the President of USA. A huge balloon was made of Donald Trump dressed as a baby and the Mayor of London allowed it to fly over on the day of his visit. Giant crop circles were made that would be seen as his helicopter flew over. Trafalgar Square filled up with people brandishing banners to say what they really think of the American President.

Whilst all this hate is being projected, I want my American friends to know that this focused force of disapproval is in solidarity with the American people. That we feel your pain, as I am sure you feel ours with the Brexit debacle. We are just people and you are just people. The injustice is in our leadership, which we can all agree, is screwed up, both ours and yours. Moreover, we are all suffering the consequences.

Don’t Mention The President – or Brexit.

When we went to Pantheacon in San Jose, California, just one month after Donald Trump’s inauguration we were met with such gracious hospitality. We came across all kinds of diverse people at the conference, beautiful, joyous and consciously aware people. Later on, when we visited San Francisco, we explored various aspects of the city from the richness and wealth of the shops around Union Square to the tent towns of Haight and the Mission. Once again, we found warmth and friendliness everywhere.

Though there was a definite anti-Trump vibe with an underlying feeling of unrest, politics wasn’t on the agenda. Surprised the Presidency was hardly mentioned during our visit I kept it hidden away in the closet along with Brexit. Worrying developments in world politics locked up like shameful little secrets. Whenever the Presidency was talked about, it was the same apologetic tone and carried the same lack of credence that we have for our own comic book politics.

A Load of Inaugural Balls!

President Trump and the First Lady attended three official inaugural balls during the evening of January 20, 2017, titled “Liberty and Freedom: The Official Presidential Inaugural Balls.” The third party was the Armed Services Ball. So, the first thing on Trump’s agenda was to celebrate Liberty, Freedom and War. This got me thinking, I talked earlier about the ex-wife Liberty, but there are two other women in this relationship. Freedom and Victory. So let’s take a moment to remember and recognise these three American women.

We all know Lady Liberty, she has featured in hundreds of movies and has been standing on Ellis Island since 1886. The Statue of Liberty Monument was a given to the United States from France to celebrate the friendship the two endured during the American Revolution. A reassuring sign to immigrants arriving in New York that they were finally arriving in the land of dreams. Her flame, one of empowerment, became a flame of hope to welcome thousands of settlers to their new home.

This poem by Emma Lazarus is inscribed at Lady Liberty’s feet.

“Give me your tired, your poor,
Your huddled masses yearning to breathe free,
The wretched refuse of your teeming shore.
Send these, the homeless, tempest-tossed, to me:
I lift my lamp beside the golden door.”

Lady Freedom has stood stalwart on Capitol building in Washington DC since 1863 and is the first lady of these three to grace the sky. Encircled by the motto, E pluribus unum, loosely translated as, ‘Out of one, many.’ a bold native woman wears an eagle on her head and stands symbolic of our natural birthright. The Statue of Freedom holds a sheathed sword in her right hand and a laurel wreath with a shield in her left. Over her shoulder is draped a Native American fringed blanket.

This excerpt is from a poem by Rita Dove called ‘The Lady of Freedom Among Us.’ Read the whole poem here.

She stands over Union Square in San Francisco. A magnificent woman holding a trident and laurel wreath, as if you could rise up and fly right through it. The inscription on the square base supporting the column describes the dedication of the monument to Admiral George Dewey. The Dewey Monument was dedicated by President Roosevelt in 1903 to commemorate the victory of the American Navy at Manila Bay on May 1, 1898. It describes the war, but says nothing to identify the Goddess statue. There is no mention of this Lady’s name on the monument. Youngest of our three American women, who is this mysterious goddess?

On the bottom floor of Macey’s (where we went to use the bathroom) is a jewellery department. Right at the back is a smaller statue identical to the Dewey Monument on Union Square. There was still no clue of who this mystery woman might be, so Max asked the shop assistant if he knew who she was. Dressed in pin stripe, with sparkly eyes and an immaculately turned moustache, the man answered ‘Yes, sir I do.’ He smiled courteously and walked away – his little joke. We laughed together and he explained, as if he didn’t get asked this question several times a day. The lady is Nike, an ancient Greek Goddess who personifies victory. We thanked him and noticed his name badge said Achilles! I had to ask and yes, Achilles is his real name.

I couldn’t find a poem about Lady Victory, so here is one I’ve just written.

Victory followed unity to the heart
of San Francisco. Traded her flowers
for a laurel crown, to preside over
100 years of risen up and trodden down.
Big footed, elegant grace, raised her trident
over waves of change. She has known trouble
she’s witnessed strife, watched her people
build the dream, others lay down their lives.
Followed a promise of liberation,
watched the unfolding degradation
of men who called it success.
Another city where gentrification
made a mockery of victory.
And we knew her before her dedication to war,
when triumph meant something more,
a time when struggle would be overcome
by union leaders and freedom seekers.
We knew her in the summer of love,
when she saw the magic bus off
to birth a culture of consciousness.
Acid drop tests to try and make
some kind of sense of this mess.
And now we are turned off, tuned out,
and dropped in it, she maintains her grace
silently stirring the sky with her three headed spear,
seeding the clouds with her promise.
Victory for All.
By Lisa Goodwin 23/07/2018

Liberty, Freedom and Victory is Ours

I have come to love these three American women, I want to break them out of their stone and bronze casings to make them come alive. Living and breathing through real and raw women of power. So let’s move away from those twisted versions of liberty, freedom and victory that our leaders have re-framed and fed back to the masses in order to have power over. Let us reclaim that power and align with the core Truth of these principles.
Liberty, Freedom and Victory have been pulled out of shape to assist the agendas of those who seek to harm and divide. But we remember them in their true form before power corrupted them. Just a little shape-shifting and we see, these principles are pure and true and they are there for us. I invite you to tune into these three American women, feel the True power of these three concepts and consider what they mean to you.
Thank you for reading. Please share your thoughts in the comments. If you have enjoyed this blog, click to follow Really Wanna Go or sign up for weekly updates.
Pin
Share
Tweet
+1